4 Hours European Le Mans Series race at Monza was just as dramatic and turbulent as the series often are.

With 41 starting cars, incidents and problems were guaranteed.

M.Racing #19 with Lucas Legeret and Laurent Millara had the LMP3 Pole, in front of Nielsen Racing #7 and Oregon Team #10. In fact, it was Norma 1-5 before United Autosports #2 which was the best Ligier in P6.

Eurointernational #11 with Mikkel Jensen and Jens Petersen started the race from P40, since an accident in practice for Petersen meant they couldn’t drive in the qualifying.

There were already fights for positions on the way into Turn 1, when Graff #39 squeezed itself past and took the lead. A few cars behind there was panic in the LMP2 field, when Algarve Pro Racing #25 spun around and went over the grass.

Cetilar Racing Villorba Corse #47 pitted already after second lap due to a puncture.

Anders Fjordbach in High Class Racing #20 had done one of his usual good starts and was already up to P8 after a few minutes.

It didn’t take long before another trouble ensued in the first chicane again. There was a contact between JMW Motorsport Ferrari #66 and Spirit of Race Ferrari #55 – which looked like to involve Kessel Racing Ferrari #83 as well. It took a bit of time before the coast was clear again and everyone involved to continued the race again. #66 got a Drive-through for the contact.

Cool Racing #37 pitted after a few laps but came back after a quick pitstop.

Jensen and Eurointernational #11 did a sensational work and was already up to fifth place in LMP3 – a what a strong drive from the Dane.

High Class Racing #20 and Dempsey-Proton Racing Porsche #77 came a little too close to each other in Variante Ascari, which pushed #20 to get stuck and had to be pulled free, while #77 could drive back to the track by itself. What a shame for the Danish team after such a good start. It all started by #77 spinning around in the middle of the track and #20 having to avoid it.

Team Project 1 Porsche #56 with Egidio Perfetti took the lead of the GTE category, after about 20 minutes, by overtaking Luzich Racing Ferrari #51.

DragonSpeed #21 thought it was their turn to lead the race, so they went side by side with Graff #39, where there was a little contact before #21 was through. #39 got a warning for the incident.

Nielsen Racing #8 dug itself into the gravel, which caused a Full Course Yellow, so that the car could get towed free.

RLR MSport #43 got a Drive-through penalty for starting the engine too early during their first pitstop.

The second RLR MSport #15 was unfortunately also in trouble, but more of a technical one, with a crack in the engine. Thus the day was over for them, after only 47 minutes drive.

United Autosports #3 was plagued by electrical problems, so the team was also being in the garage for a long time, but they managed to come back to the track.

Cetilar Racing Villorba Corse #47 also had a bad day at the office when they had to retire shortly afterwards, due to technical problems.

Duqueine Engineering #30 and Carlin #45 had a bit of contact, which sent #30 out in a spin. But both could continue to drive.

IDEC Sport #28 also had a twirl, but it was from their own error.

Nielsen Racing #8 was in trouble yet again, and this time the Safety Car was deployed, in order to get the car removed. After a huge run-off at the exit of Variante Ascari.

United Autosports #22 with Phil Hanson had a tour through the chicane, and had to let IDEC Sport #28 and Panis Barthez Competition #24 to get past again, since Hanson didn’t use the correct track.

BHK Motorsport #35 got a Drive-through penalty for overtaking before they had passed a green flag, after the SC period was over.

Kessel Racing Ferrari #83 with Michelle Gatting after two hours of racing had driven up to second place in GTE. There were, however, some small damages at the front of the car from earlier in the race, and it was slowly but surely became worse and worse, that the race director chose to call them in for an obligatory pitstop, to get the car repaired. Because of that they went out of top three.

G-Drive Racing #26 had the lead in LMP2 halfway through the race, while Realteam Racing #9 was leading LMP3, and JMW Motorsport Ferrari #66 in GTE.

With 80 minutes left on the clock, there was another drama in LMP3. Oregon Team #10 had a massive problems with the brakes, which went into flames while they refuelled.

At the same time, the leading Nielsen Racing #7 was suddenly slowing down on the track, so Tony Wells lost the lead to Realteam Racing #9.

United Autosports #3’s day didn’t get much better, when Mike Guasch went off into the gravel in Lesmo 1. It caused a Full Course Yellow, so that the car can get removed.

Luckily, it didn’t take too long, but on the other hand Sergio Pianezzola in Kessel Racing Ferrari #60 didn’t take long either to drive off into the gravel in Lesmo 2. It could be handled with a local yellow flag zone without interrupting the race.

Spirit of Race Ferrari #55 got a 15-second Stop & Go penalty for speeding in the pitlane.

Paul Loup Chatin in IDEC Sport #28 was flying, and he overtook Alex Brundle in United Autosports #32 with 35 minutes left of the race. Now he only had seven seconds to the leader, which surely would be his next target.

25 minutes before the race ended, there was panic in Variante Ascari again, when Ultimate #17 and Kessel Racing Ferrari #60 collided. The two cars stopped right in the middle of the track, and it was pure luck that everyone else could avoid hitting them. Both cars could continue, but #17 damaged its rear suspension, so it didn’t take many metres before Francois Heriau parked the car in the gravel. And it caused another FCY. #60 could come back to the pits and got pushed into the garage, where the mechanics were ready with a big roll of tank tape.

Eurointernational #11 with Jens Petersen behind the wheel had taken the lead in the LMP3 class, and went to pit for the last refuel, with 20 minutes left on the clock. The timing fit perfectly, since the FCY period ended just as he left the pits. Thus they kept the lead and still had a gap of nearly half a minute to Inter Europol Competition #13 on second place.

Kessel Racing Ferrari #83 needed the last splash of fuel in order to run to the finish, so they pitted with a few minutes left. The mechanics refuelled the car – but Rahel Frey had to pit one more time, since they didn’t put enough fuel in the previous pitstop.

RLR MSport #43 spun in Parabolica with less than one minute left. It took a long time for John Farano to restart the car, and when he finally did he was already passed by the leading car, which get the chequered flag. Farano commited another mistake by driving the car back to the pits, instead of crossing the finish line. Thus the car get a DNF status. And a race result is always better than a DNF. 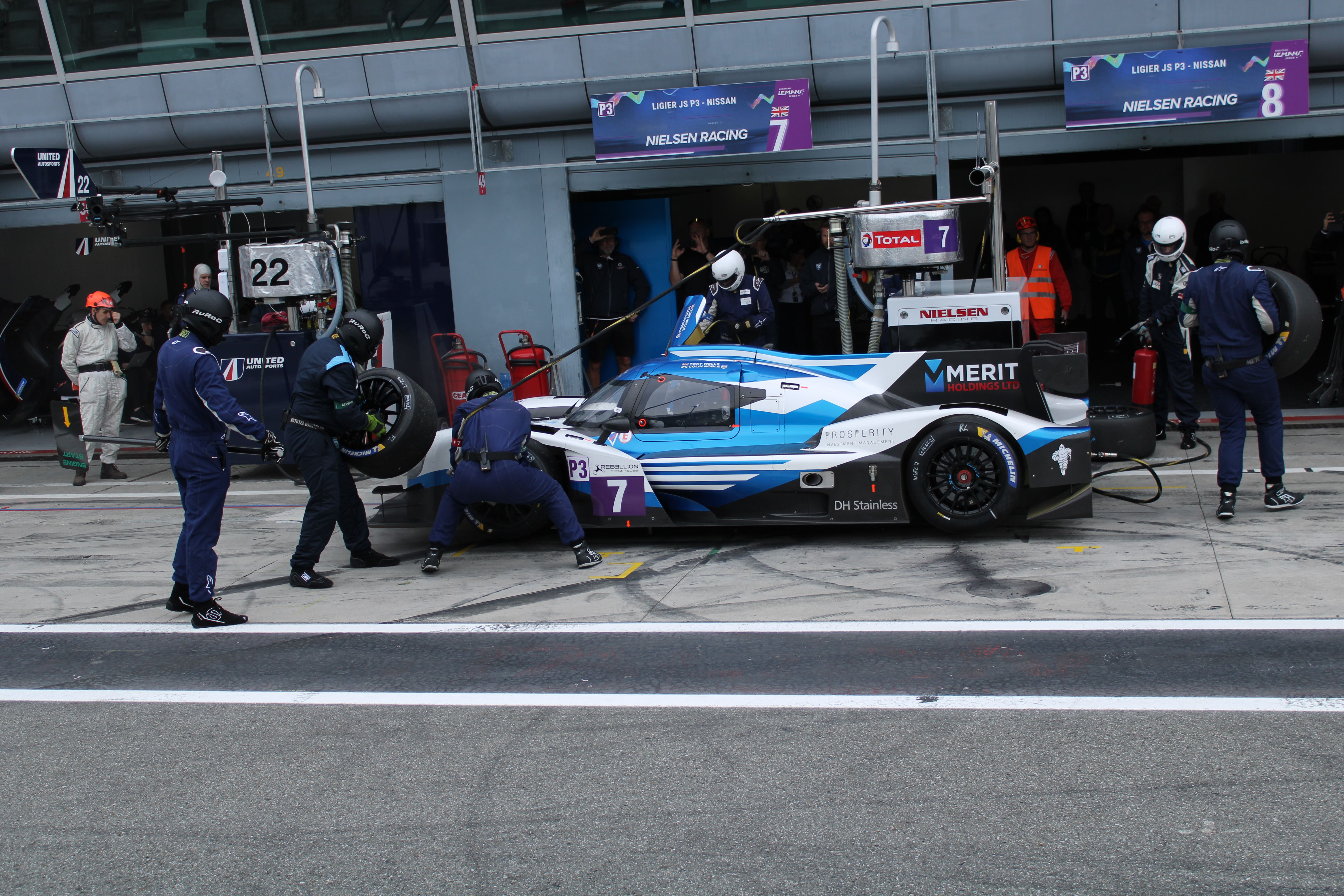 In LMP3, Eurointernational #11 with Mikkel Jensen and Jens Petersen took the victory – from starting last – ahead of Inter Europol Competition #13 with Martin Hippe and Nigel Moore, and yet another podium for United Autosports with #2 driven by Wayne Boyd, Garret Grist and Tommy Erdos.

The next round of European Le Mans Series will be the evening race at Circuit de Catalunya on 20 July 2019.