IMSA WeatherTech SportsCar Championship took off to Canadian Tire Motorsport Park, that was earlier known as Mosport. The duration of the race would be the standard two hours and 2 hours and forty minutes of IMSA races. It was, however, only the second time this season so far, after the durations of 24 hours, 12 hours, 100 minutes, 2 hours 40 minutes, 100 minutes, and 6 hours.

Colin Braun had secured Pole Position for CORE autosport Nissan #54. After many months dominance from Mazda, it was time for the other Japanese brand. The team chose to change tires as well as put Jon Bennett as the starting driver, which was why they wouldn’t start the race from Pole but from second to last position.

Acura Team Penske #7 with Helio Castroneves and Ricky Taylor then went to take the first start position on the grid, in front of Mazda Team Joest #55 with last week’s winners Harry Tincknell and Jonathan Bomarito, while Acura Team Penske #6 with Juan Pablo Montoya and Dane Cameron started from third.

In LMP2 it was Performance Tech Motorsports #38 with Kyle Masson and Cameron Cassels in Pole, ahead of PR1 Mathiasen Motorsports #52 with Matt McMurry and Dalton Kellett.

Jesse Krohn and John Edwards in BMW Team RLL #24 took Pole Position ahead of their teammates in #25 with Connor De Phillippi, while Ryan Briscoe and Richard Westbrook in Ford Chip Ganassi Racing #67 would start third. Jan Magnussen and Antonio Garcia in Corvette Racing #3 started from P7.

Turner Motorsport BMW #96 with Bill Auberlen and Robby Foley had taken Pole Position in GTD, in followed by Riley Motorsports – Team AMG #33 with Jeroen Bleekemolen and Ben Keating, and the winners from last week Meyer Shank Racing Acura #86 with Mario Farnbacher and Trent Hindman in P3. Christina Nielsen wasn’t present this weekend, since she had other commitments in Blancpain GT World Challenge Asia.

The champion from last year, Paul Miller Racing Lamborghini #48 wouldn’t start either. Ryan Hardwick had a collision with a prototype in practice, which totally damaged the car so it couldn’t get to the track for either the qualifying or race. It meant he and Bryan Sellers were out of the championship, as they would leave the weekend with zero point without even getting the minimum points that everyone gets if they cross they green flag at the start of the race.

Acura Team Penske #7 took off in a relatively drama free start on the fast track. By the end of the first lap, Bomarito in #55 tried to get past Castroneves in #7, and was right beside the white and red Acura but had to merge back behind.

In GTLM, BMW Team RLL #25 fell back to fifth place in the class, but otherwise there were no changes.

Ben Keating in Riley Motorsports – Team AMG #33 fell back to P4 in GTD, while Zach Robichon in Pfaff Motorsports #9 came up to third in the Canadian Porsche.

Ten minutes into the race, Mazda Team Joest #55 took the lead down the back straight and quickly built a gap to the two Acura Team Penske cars.

Shortly afterwards there was a contact between Juncos Racing Cadillac #50 and Lone Star Racing Mercedes #74 in Turn 2, but both cars could continue after a bit.

Turner Motorsport BMW #96 and Meyer Shank Racing Acura #86 had a little contact in Turn 5, but the positions remained the same.

Things were about to go wrong for Jan Magnussen, when he was about to be overlapped by Mazda Team Joest #55 and PR1 Mathiasen Motorsports #52. The three cars came side by side through Turn 1, men he got a small push from #52. Fortunately, the Dane could keep the car on the track and stayed in P6 in the GTLM class.

Ryan Briscoe in Ford Chip Ganassi Racing #67 lost two places to Porsche #911 and #912, and went down to fourth in the class.

Acura Team Penske #6 was the first car among the leaders to pit, where the team also swapped Montoya with Cameron. One lap later #7 also changed Castroneves with Taylor, and Nunez with Jarvis in #77. Bomarito in #55 remained in the car and took an extra stint.

JDC-Miller Motorsports Cadillac #85 got a drive-through penalty for driving 2 mph too fast in the pitlane.

45 minutes into the race, Corvette Racing #3 changed from Jan Magnussen to Antonio Garcia. Garcia had a bit of problems with getting the car in gear, and it cost him a few extra seconds after the refuelling.

Oliver Jarvis in Mazda Team Joest #77 came up to third position in the Dpi class by overtaking Ricky Taylor in Acura Team Penske #7.

AIM Vasser Sullivan Lexus #14 brushed the rear of Park Place Motorsport Porsche #73, where the two cars couldn’t agree on how fast you should brake before the pit entry.  Apart from some scratches on the front of #14, nothing more happened.

An hour into the race there was a contact between AIM Vasser Sullivan Lexus #14 and Pfaff Motorsports Porsche #9 in Turn 5. Scott Hargrove in #9 had a little detour off the track, and when he came back he drove right in front of #14, where Jack Hawksworth couldn’t avoid him. The stewards looked into it and decided that #9 was responsible and gave them a Drive-through penalty. While #9 could continue, #14 had to go back to the pits and get a repair due to a broken steering wheel.

Porsche was fast to do their first pitstop on #912, so they could come out in the lead in GTLM, with BMW Team RLL #24 and #25 on the next positions.

Acura Team Penske #7 had to pit from a puncture, which made it difficult for them to get a good result, unless there was a Safety Car period.

When Mazda Team Joest #77 came to the pits, it was with two locked wheels towards and over the line in the pit entry. Luckily, Jarvis managed to brake the car enough so he didn’t get penalised for speeding in the pitlane.

The two Acura Team Penske cars were really fast and also lucky in the traffic that they could drive two seconds faster per lap than the Mazda Team Joest cars, which was why #55 was still in the lead while #6 and #7 were back in front of #77.

AIM Vasser Sullivan Lexus #14 was back on the track for a single lap before going back to the tent for more repairs.

The final hour of the race started with Mazda Team Joest #55 in front of DPi, PR1 Mathiasen Motorsports #52 in LMP2, Porsche #912 in GTLM and Turner Motorsport BMW #96 in GTD.

Shortly afterwards, it was time for the last round of pitstops for both GTLM and GTD bilerne, and they could drive to the end without needing to pit again.

It didn’t change top three in GTD, where it was still Turner Motorsport BMW #96, Meyer Shank Racing Acura #86, and AIM Vasser Sullivan Lexus #12, while top three in GTLM changed with Porsche #912 now leading, ahead of BMW Team RLL #24 and Porsche #911.

49 minutes before the end, Performance Tech Motorsports #38 stopped on the track after a contact. It got almost all the DPi cars to pit.

It went wrong for Mazda Team Joest #55, when their pitstop took way too long. It caused Harry Tincknell to lose the lead to his teammate Oliver Jarvis in #77. But it wasn’t too bad and #55 merged back to second place, in front of Acura Team Penske #6 and Konica Minolta Wayne Taylor Racing Cadillac #10. Although #10 still needed to do their last pitstop, so they would eventually fall back.

The stranded #38 deployed the first Safety Car of the day, which got the whole field close together again, and there would be battles in three out of the four classes.

With 36 minutes left on the clock, the race got restarted. Dane Cameron in Acura Team Penske #6 immediately went to attack Tincknell in #55, but the Englishman could defend himself.

Top 4 in GTLM kept changing between BMW Team RLL and Porsche, which lasted for the entire first lap after the restart.

Lone Star Racing Mercedes #74 got a Stop & Go penalty as well as ten extra seconds for not doing their pitstop correctly.

It didn’t take long for the Safety Car to come back, when Juncos Racing Cadillac #50 had a huge exit in Turn 2, where Victor Franzoni ended up in the middle of the tire wall – with the car lying on its side. The picture on TV later showed that he went off sideways, in a high speed. Luckily we saw him sitting on a stretcher, talking to the doctors, and later they helped him into the ambulance. We wish Franzoni a speedy recovery.

With 17 minutes left, the race got redflagged, so the tire barrier could be repaired. Why it took almost fifteen minutes before the race director decided to stop the race was a bit of a mystery.

The drivers only got one warm-up lap before the race got restarted.

Antonio Garcia was caught behind a group of GTD cars, which the Spaniard in Corvette Racing #3 had to overtake – but top six in the GTLM field already pulled away. 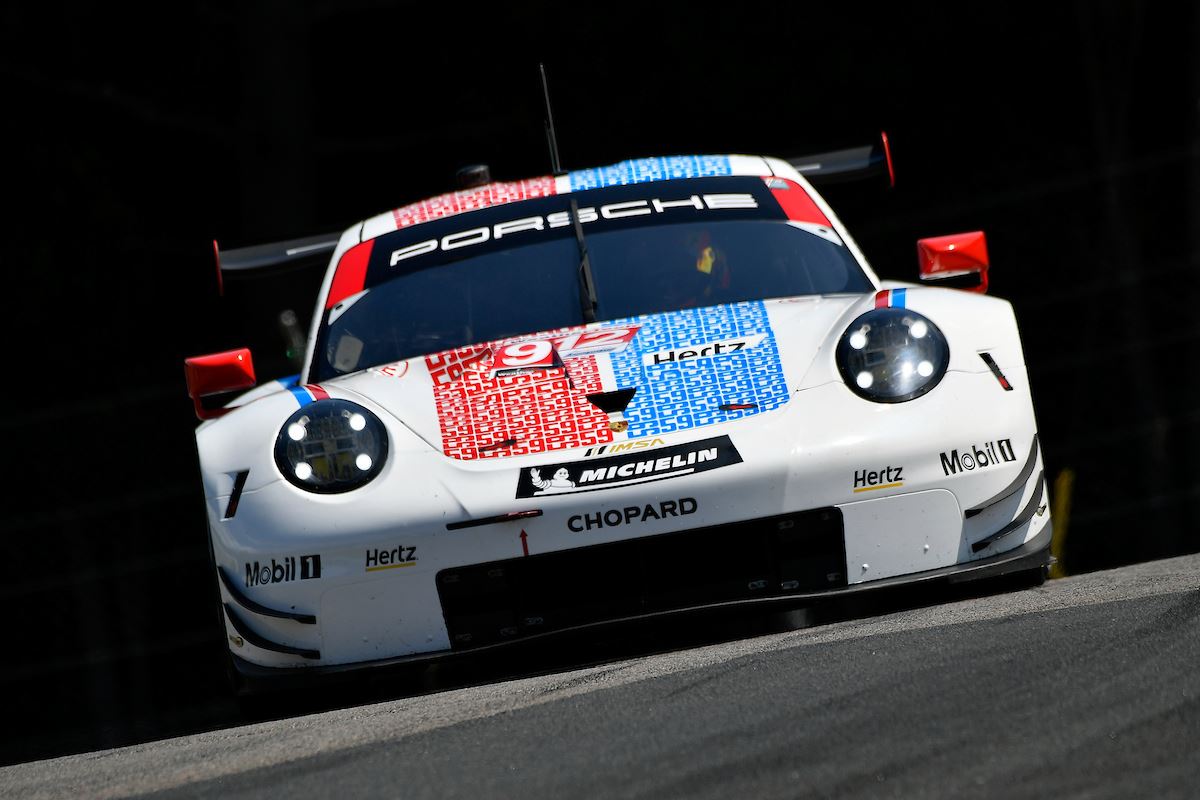 Pipo Derani in Whelen Engineering Cadillac #31 and Ricky Taylor in Acura Team Penske #7 had a cool duel for fourth place, which Derani won with a bit of luck in the traffic. Colin Braun in CORE autosport Nissan #54 also tried to drive past #7, but the two cars brushed each other and #54 had a wild tour over the grass. He could then come back to the track between two cars, before stopping in the run-off area. It was pure luck that he didn’t hit any car.

Mustang Sampling Cadillac #5 stalled on the start-finish straight, with five minutes left on the clock, and Filipe Albuquerque rolled the car down the hill to Turn 1, where he had to park it and retire.

Mazda Team Joest #77 with Tristan Nunez and Oliver Jarvis won the race, ahead of their teammates in #55 with Harry Tincknell and Jonathan Bomarito, while Acura Team Penske #6 with Dane Cameron and Juan Pablo Montoya finished third. After waiting for a long time to win, Mazda took 1-2 two weeks in a row.

Antonio Garcia and Jan Magnussen in Corvette Racing #3 finished seventh in the GTLM category, after a bad day at the office. Their teammates Oliver Gavin and substitute Marcel Fässler finished right behind them.

The GTD class was won by Turner Motorsport BMW #96 with Robby Foley and Bill Auberlen, with Meyer Shank Racing Acura #86 driven by Mario Farnbacher and Trent Hindman, and AIM Vasser Sullivan Lexus #12 with Townsend Bell and Frankie Montecalvo in the following places.

Porsche #912 is leading GTLM, ahead of their teammates in #911, while Corvette Racing #3 is still third in the GTLM championship, but they are eleven points behind the leading Porsche. Which means they need to start beating the Porsche in order to catch up with them before the season finale.

The next race will be run in two weeks’ time at Lime Rock Park, but only for the GTLM and GTD cars due to the short length and narrowness of the track.