The 58th edition of Rolex 24 at Daytona had a dry start in 20 degrees temperature when the 38 cars passed the green flag.

Christina Nielsen had qualified GEAR Racing Powered by Grasser Lamborghini #19 in P14 in the class. A car that she shares with Katherine Legge, Tatiana Calderon and Rahel Frey, who jumped to the car as a substitute to Ana Beatriz, the fourth driver in the car who announced earlier in the week that she is expecting.

In the GTLM category, there was a Porsche 1-2 with Porsche #911 on Pole Position, with Nick Tandy, Fred Makowiecki and Matt Campbell, while Porsche #912 with Laurens Vanthoor, Earl Bamber and Mathieu Jaminet started from P2, and Corvette Racing #3 with Antonio Garcia, Jordan Taylor and Nicky Catsburg was P3.

Luckily, all the cars were ready. Black Swan Racing Porsche #54 had built up a totally new car, on bodywork that Wright Motorsports had available. But the mechanics were exhausted after working late Friday night, in order to get it ready for the last free practice.

Antonio Garcia in Corvette Racing #3 was also being aggressive on the first lap and went up to the second place in the GTLM category.

Turner Motorsport BMW #96 came up from fourth to second in the GTD category. And all of these happened within the first ten minutes of the race.

The leading cars got seven laps in free air before they began catching up with the GTD cars.

Performance Tech Motorsports #38 came up second in LMP2, while DragonSpeed #81 fell back to fourth.

Acura Team Penske #7 and Konica Minolta Wayne Taylor Racing #10 almost had a collision, when the two had to overtake some slower cars on the oval, but Ryan Briscoe in #10 managed to brake in time.

GEAR Racing Powered by Grasser Lambo #19 was one of the first GTD cars to pit, where Christina Nielsen had some electrical problems, so the team changed the steering wheel. Unfortunately, it made her drop to the last position when she handed over the car to Tatiana Calderon, who had to check if the problems persisted.

The mechanics on BMW Team RLL #25 had a hard time getting the right front wheel off the car during their second pitstop. The mechanic tried three different impact wrenches before he managed to get it off, replaced by new Michelin tire. It cost the car about a minute extra in the pits, which equals to a bit over a half lap in full speed.

Under two hours into the race, Whelen Engineering Cadillac #31 came to the pits in slower speed. The sun visor from the windscreen was blown away in front of the air intake, so it could no longer get air. The quick solution for the mechanic was to rip the foil off the car and send it back out.

There was a drama when Mazda Team Joest #55 did their fourth pitstop. Ryan Hunter-Reay dived to the pits very late and was about to drive into the GEAR Racing Lambo on the way in. He shook his head when he got off the car. The driver change to Harry Tincknell didn’t go smoothly either, causing the team to lose a couple more seconds. 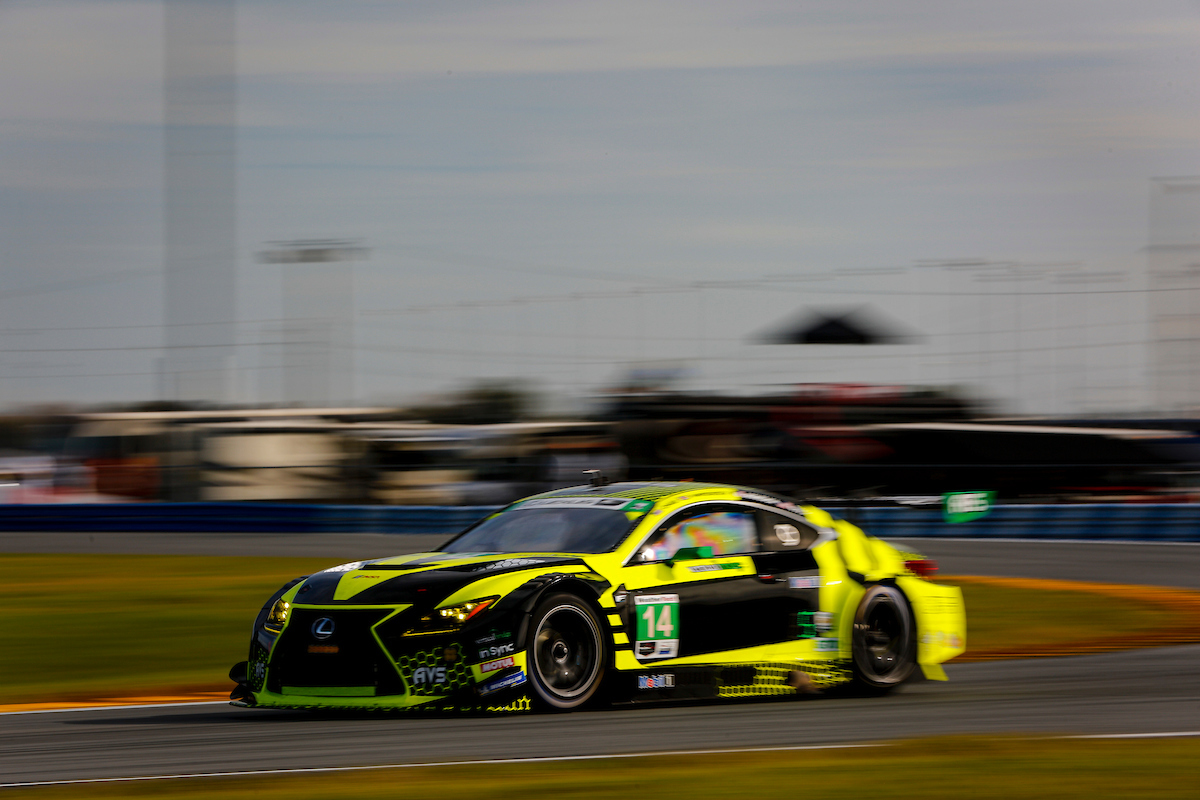 WRT Speedstar Audi Sport #88 in the GTD category didn’t manage to brake in time when they pitted for the third time. Rolf Ineichen completely missed the pit crew and drove past them. Thus the mechanics had to run after the car and push it back before they could refuel and change tires – and get Daniel Morad in the car.

The two Porsches in GTLM had swapped positions, so Porsche #912 was now leading ahead of #911, while BMW Team RLL #24 came up to the third place, in front of Corvette Racing #3.

Three hours into the race, Kobayashi in Konica Minolta Wayne Taylor Racing Cadillac #10 took the lead of the race, after doing a very late dive on Tristan Nunez in Mazda Team Joest #77. It was the first time in the race that #77 wasn’t in the lead, except for when it went to the pits.

The lead changed again after both cars had pitted. #77 pitted before #10 and thus had warmer tires. So Nunez drove past Kobayashi with a resolute manoeuvre on the way out of NASCAR Turn 2.

The first penalty of the day was awarded to Kamui Kobayashi: a drive-through penalty for driving 3 kph too fast in the pitlane, and suddenly he was out of the top five in the DPi category.

Three and a half hours into the race, we saw the first collision when Mazda Team Joest #55 and Acura Team Penske #7 collided in the entrance to the Bus Stop Chicane. It sent Helio Castroneves in #7 hard into the wall, which ripped the rear wing off the car. Both cars could, however, drive back to the pits. #55 just got a new set of tires and went back out, while #7 drove back to the garage where the mechanics began to repair the car straight away. #55 got a drive-through for the offence.

Meyer Shank Racing Acura #86 also got a drive-through penalty for speeding in the pitlane.

Kobayashi was so determined to regain the positions he lost that he overtook Sebastien Bourdais in Mustang Sampling JDC Cadillac #5 from the outside in Turn 1. It succeeded after trying for several laps, on different places on the track.

Heart of Racing Aston Martin #23 and Performance Tech Motorsports #38 had a bit of contact but nothing the stewards would penalise.

After about forty minutes of repair, Acura Team Penske #7 was back to the track, twenty-three laps behind the other DPi cars.

DragonSpeed #81 got a puncture on the right rear tire, but Colin Braun did a good job in driving the car back to the pits.

AIM Vasser Sullivan Lexus #12 had to get a new door after the window fell off from the right door. Luckily, it only took a few seconds longer than a normal pitstop.

BMW Team RLL #24 had slowly but surely drove itself up to the lead in GTLM, a couple of seconds ahead of both Porsches.

Five and a half hours into the race, GRT Grasser Racing Team Lamborghini #11 ran into trouble and had to drive nearly an entire lap with reduced speed, before Franck Perera brought the car back to the pits.

Shortly afterwards, we saw the first Full Course Caution of the day when Heart of Racing Aston Martin #23 and Precision Performance Motorsports Lamborghini #47 had a collision in the pit entry. #47 could continue to the pits, but #23 had to be towed since the front of the car was damaged after the contact with the Lambo. The replay showed that #23 ran into #47 in full speed as it was about to turn and slow down before entering the pitlane.

Under the FCY period, Pfaff Motorsports Porsche #9 suddenly slowed down, and not because it was driving behind the Safety Car. It had otherwise been dominant in the GTD lead since the start of the race. Lars Kern got it back to normal speed again, but the car had fallen down to the second place.

BMW Team RLL #25 also stalled on the track, but Bruno Senna quickly restarted it. The first restart didn’t work, so he tried another one. It still didn’t work, so he had to try for the third time before he could drive it back to the pits, and straight away into the garage.

The race got restarted shortly after that, with Olivier Pla in Mazda Team Joest #77 putting Filipe Albuquerque in Whelen Engineering Cadillac #31 under pressure.

Meanwhile, the stewards were done looking into the collision between #23 and #47, which resulted in a 60-second Stop & Go penalty for Heart of Racing Aston Martin #23. A penalty they would never manage to do as the car was too damaged.

There were also some battles (as usual) in GTLM, where Porsche #911 was back in front, while BMW Team RLL #24 tried to overtake it with no results. Corvette Racing #3 was back in P3, while Porsche #912 was down to fourth.

Scuderia Corsa Ferrari #63 took the lead in GTD when Toni Vilander drove past Corey Lewis in Paul Miller Racing Lambo #48, while Praff Motorsports Porsche #9 was third. Actually, they held still on the track as they were about to overtake the Safety Car unjustifiably. And they got away with it since they fell back to the correct position again – in P2, like a little unofficial punishment for the action.

BMW Team RLL #25 was back to the track after twenty-three minutes of repair. The problem was a broken oil connection, due to some debris, that was flung up.

Just before the six-hour mark, there was more drama to come. Riley Motorsports Mercedes #74 and WRT Speedstar Audi Sport #88 collided on the way to the Bus Stop Chicane, but both cars could continue.

Corvette Racing #3 and Aston Martin Racing #98 had a contact under braking in Turn 1, where both cars spun with high speed. They were lucky not to hit anything and went directly to the pits for new tires. On the way out of the pitlane, #98 clipped the concrete wall in Turn 1, which caused the car more damage and the mechanics had to start repairing it. Overall, a bad time for Aston Martin fans as both their cars were out of the race.

Thus, the race was over for Nicki Thiim, who was one of the drivers in #23.

After six hours of racing, Konica Minolta Wayne Taylor Racing Cadillac #10 was ahead in DPi, PR1 Mathiasen Motorsports #52 in LMP2, BMW Team RLL #24 in GTLM and GEAR Racing powered by Grasser Lambo #19 in GTD – the latter was, however, on a different pit strategy, but it meant that they got a maximum point in the Michelin Endurance Cup, which is the championship for the long-distance races.