The NTT IndyCar Series has had to update the 2020 series schedule, due to the COVID-19 preventing some rounds from being run.

It’s the race weekend at Portland International Raceway, plus the two races races at WeatherTech Raceway Laguna Seca being cancelled, since it’s a long drive to the west of the USA for those three races, plus it’s some of the areas mostly affected by the number of cases, compared to the mid-states.

The race weekend in one and a half weeks time at Mid-Ohio Sports Car Course has been upgraded to a double round, with a race on Saturday as well as a race on Sunday.

Then it’s time for Indianapolis, for the 500 Miles race. It was initially decided to run that at 50% spectator capacity, but that have been reduced to just 25% of the seats allowed to being sold.

One week later, it’s another double round at World Wide Technology Raceway, which is a double up of the originally planned. 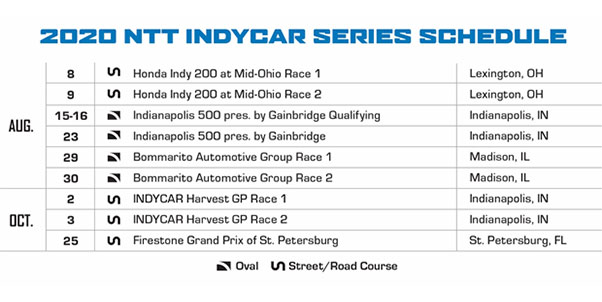 The first weekend of October will see the cars back on the Indianapolis infield, just like on the 4th of July. That’s another edition of both Saturday and Sunday racing.

The final is still scheduled to run on 25 October in St. Petersburg, Florida. Florida is currently another one of the very affected areas in the USA, and if that trend continues, it won’t be beyond the bounds of possibility to cancel that race. There is however still 3 months until that round, so a lot can happen before that.

By making Mid-Ohio, WWTR and Indianapolis Harvest GP double rounds, the number of races can be kept to the same, as the schedule released towards the end of May.